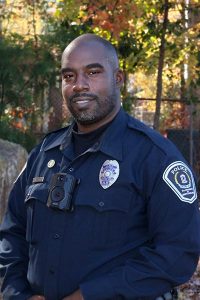 UNC Police has named Investigator Raymond Oliver its 2020 UNC Public Safety Officer of the Year. Oliver began his law enforcement career with UNC Police on Jan. 7, 2012, after earning his bachelor’s degree in criminal justice from Virginia Commonwealth University. He started his service to UNC-Chapel Hill in the Patrol Division, and in 2013 he was selected to be a bicycle officer and assigned to the Community Response Unit (CRU). While on the CRU, Oliver received his Law Enforcement Bicycle Education certification as a bicycle officer. In 2015, he was selected to move to the Criminal Investigations Division (CID) where he continues to serve and excel. During his time in the CID, Oliver attended education and training courses to become a member of the Internet Crimes Against Children Task Force. The work he continues to do related to the investigation of child pornography and crimes against children is invaluable. Oliver noted that the work is very challenging but also rewarding when prosecutions are successful.

“I am extremely proud of the work ethic and commitment to excellence Investigator Oliver brings to the workplace each day,” UNC Police Chief David Perry said. “His willingness to go the extra mile on the most challenging cases is an infectious inspiration to the rest of the team.”

Since being assigned to the CID, Oliver has received his Advanced Law Enforcement Certification, became a Rape Aggression Defense Instructor, a Fair and Impartial Policing Instructor, a Blacklight Forensic Examiner, a Cellebrite Forensic Examiner, obtained his Commercial Drone Pilot License and is a hostage negotiator. Oliver also oversees the department’s Body-Worn Camera Program. Oliver possesses many talents that help keep the University campus safe and UNC Police operating effectively, and is well deserving of this honor.